Over the last several years the number of mountain lion encounters and conflicts with people and pets in the Wood River Valley have increased. This uptick has led to an elevated level of concern over public safety, as well as raised questions about lion numbers, behavior, and habitat use in the Valley. Since July 2019 well over 100 mountain lion sightings, encounters, or attacks (on pets) have occurred in Blaine County, with most happening in the Wood River Valley. Security cameras throughout the Valley have documented lions moving through residential developments, and lion activity appears to be occurring during daylight hours as well as at night.

Lion presence has likely increased in the Valley partly because of resident deer and elk herds since they are the preferred prey of lions. Fish and Game, working with local entities has made progress in curtailing private winter-feeding of wildlife; however, both purposeful and inadvertent feeding of deer and elk still occurs which brings mountain lions into the sphere of people. In addition, the natural habitat and topography of the Valley lends itself to animal movement, with the Big Wood River providing a natural movement corridor through Wood River Valley communities.  Aside from serving as a migration corridor, the Wood River Valley, particularly its southern reaches, is also historical winter range for deer, elk, and even pronghorn depending on snow conditions.

While population data on mountain lions is almost completely anecdotal in the Wood River Valley, it appears lions occupying the Valley have smaller home ranges, living at higher densities than would be expected in a more natural environment. Mountain lions are moving in and around community neighborhoods, sometimes during the day. Residents are reporting seeing females with as many as four kittens.

Since 1970, human population growth in the Wood River Valley has grown by 284%, from 5,800 to 22,600.  While local perception may be that the Wood River Valley is sparsely populated given the proximity to National Forest, BLM land, and wilderness areas, it is in fact one of the most densely-populated areas in Idaho.

While mountain lion populations have increased over the last 100 years across much of the United States, as noted, human population has also increased, and the recreational habits of people have shifted. More people today are engaging in non-consumptive outdoor recreational activities than they did 100 years ago, and human development into surrounding wildlands is occurring at a steady rate, increasing chances of humans and lions coming into contact with each other.

How mountain lion behavior changes in relation to human activity and whether this change is contributing to the perceived uptick in lion-human conflicts is still largely unknown.

How to do be safe in mountain lion country

Mountain lions have been living in the Wood River Valley long before human development began. Most residents, even those who have lived there for years, have never observed one. However, residents report that they are now seeing these secretive cats as they pass through their neighborhoods. Some reports include sightings of lions during daylight hours, which is not typical behavior.

Remember to use all of your senses to detect if a mountain lion is near. Using a light to help you see your surroundings is very important, both in your yard, or as you walk in your neighborhood. If you run or bike for personal fitness, use caution when wearing headphones or earbuds which take away your ability to hear if a lion, or any other wildlife, is giving you signals that you’re too close.

Mountain lions are opportunistic predators, meaning they don’t know when their next meal will happen, and will often attempt to take prey when it presents itself. A lion may perceive a pet as prey. To keep pets safe, owners are strongly encouraged to follow these safety tips:

By nature, mountain lions are shy and will make every effort to avoid contact with humans. Over the last few years it does appear there are some lions that have become more accustomed to living near Wood River Valley towns and neighborhoods. Homeowners can do several things to make it less likely that a mountain lion would take up residency near their homes and neighborhoods. These include:

Wood River Valley residents and visitors should immediately report any encounter that results in an attack to the Magic Valley Regional Office at (208) 324-4359 during business hours, 8 a.m. – 5 p.m. Monday – Friday. If after hours, reports can also be made to the Blaine County Sheriff at (208) 788-5555.

Mountain lions are true American natives, having roamed more areas in the Americas than any other mammal. They once were found from Canada in North America all the way down to Chile in South America and from the Pacific coast to the Atlantic coast. Now mountain lions are mainly found in the western part of the United States. In the east, the Florida panther, an endangered subspecies of the mountain lion, can be found.

You can find mountain lions all across Idaho. Mountain lions are the largest of the three cat species in Idaho. Males can be five and one-half feet to nine feet long and weigh 80 to 265 pounds. Females are smaller; they are five to seven and one-half feet long and weigh 64 to 140 pounds. Mountain lion colors range from a tannish reddish color to a grayish color. One thing that sets the mountain lion apart from other wild cats in Idaho is the long tail, which be from 20 to 32 inches long. Lynx and bobcats both have much shorter tails.

Mountain lions are carnivores. In Idaho, mountain lions’ favorite food is mule deer, but they will eat just about anything they can catch. Elk, smaller animals, like ground squirrels and rabbits and even birds are on their menu. Mountain lions typically stalk their prey. When mountain lions kill a large animal, they cache, or bury the carcass under leaves and twigs, which preserves the meat for several days, during which time the mountain lion may day-bed near or revisit the site periodically.

Mountain lions are one of Idaho’s most charismatic wildlife species.  Those who are fortunate enough to see a mountain lion in their lifetime are very lucky, but it is even more awe-inspiring to see one in their natural habitat, which is not within city limits.  It is up to visitors and residents of the Wood River Valley to protect themselves and mountain lions by giving these animals their space and preventing possible conflict by discouraging these predators from taking up residence within human development.  The best way to accomplish this is to ensure the protection of wide-open, undeveloped landscapes for mountain lions to continue surviving in as they have done for thousands of years. 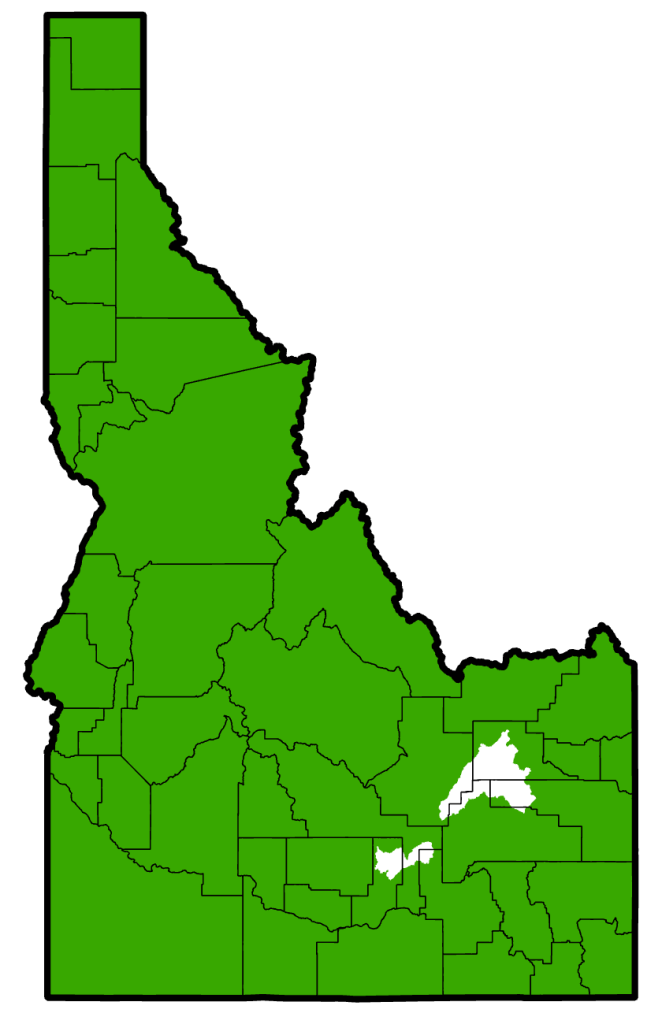